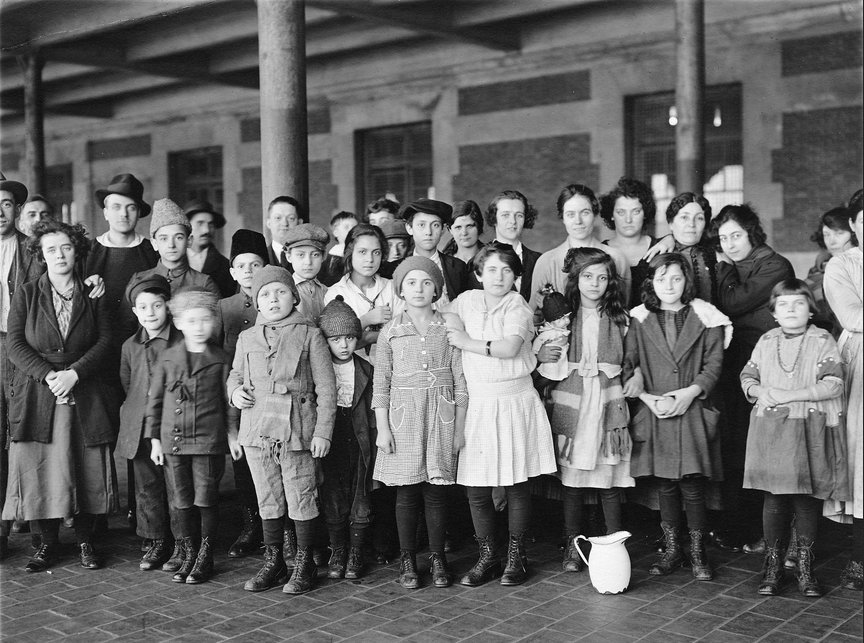 Some estimates indicate that as many as one third of all Americans have at least one ancestor who passed through the doors at Ellis Island.  Have you ever questioned your Ellis Island ancestry to see if you might have a European ancestor or two hiding in your family tree?  After all, 12 million immigrants were processed at Ellis Island during the period it operated as an immigration center from 1892 to 1954.

Even if you have no Ellis Island ancestry, it is fun to imagine what it was like for newly arriving immigrants getting off the boat after an arduous two-week voyage, clutching a bag stuffed with all their worldly belongings, taking in all the sights and sounds as a stranger in a foreign land.  The New York skyline was often the first glimpse of America for these immigrants; for a poor immigrant farmer from a rural area, the sight must have seemed absolutely amazing.

Every immigration story starts with a brave and ambitious decision to leave everything and everyone they know to make the journey to America.  The cost of a ticket on a transatlantic steamer was the biggest impediment for most immigrants.

Those on the lower rungs of the economic scale had to work and save for months to afford the approximately $30 cost of a steerage ticket.  Fares to New York City were cheapest for most immigrants, which explains why New York was by far the most popular destination.

Tickets were purchased from a steamship company in the passenger’s port of origin. The ticketing agent for the steam ship line would be familiar with the spoken language of the passenger and filled out a line on the ship’s manifest for each passenger.  A series of 25-30 questions were asked of each passenger to be used ensure they could be identified at their destination port.

It is a bit of a myth that America threw open its arms to the “huddled masses yearning to breathe free” as inscribed at the base of the Statue of Liberty.  In reality, once an immigrant’s ship arrived at the port of arrival, immigrants had to prove that they were in good health, disease free and able to support themselves by working.

The first lesson immigrants learned upon arrival in America is that money talks.  First and second-class passengers were let off the ship after a cursory inspection, free to continue onto their destination in America.  It was assumed that passengers who could afford a more expensive ticket were unlikely to be destitute making them a low risk for entry into the country.

Newly arriving immigrants holding a third class or “steerage” ticket were subjected to a series of invasive examinations and those found deaf, senile, lame or with a contagious disease were sent back to their homeland.  Fortunately, only about 2% of the new arrivals were deported for medical reasons.  Since steam ship companies had to pay for return passage of any deported immigrant, they went to great lengths to deny passengers with obvious medical, legal or financial issues from boarding their ships.

Upon entering the main lobby at Ellis Island, passengers were lined up waiting to enter with all their worldly goods in a bag, trunk or satchel.  Next, they were funneled into a staircase that led to the center of the great hall.

Although they probably didn’t notice, they were already being inspected as they made their way up the stairs.  A limp, trouble breathing or any other sign of ill health would be noticed by an inspector stationed at the top of the stairs who would write with chalk a code for the suspected condition on the overcoat of the passenger.

Doctors would perform 10-15 second medical inspections of each passenger.  Minor conditions would be treated onsite, but more serious and permanent conditions called for deportation.  After the medical inspection came the interrogation phase to verify passenger answers matched what was recorded on the ship’s manifest.

Answers to two questions in particular could get an immigrant detained or deported.  They were: How much money do you have? and Who paid for your voyage?  If you did not appear to have enough pocket money or a sponsor in America to look after your well-being, you were likely to become a ward of the state and that was grounds for deportation.  Also, U.S. law prohibited companies from paying for the passage of people for the express purpose of having them work for them in an indentured servant type of arrangement.

Although the screening process seemed complex and never ending, passengers spent on average only about 3-5 hours being processed at Ellis Island.  Once clear of these hurdles, they were free to exchange their money and purchase ferry or train tickets to their final destination.

Since nearly everyone interested in genealogy desires access to immigration records in search of their immigrant ancestors, records are available at most of the larger genealogy record repositories including FamilySearch.org, Ancestry.com, U.S. National Archives and others.

One of the easiest ways to find your Ellis Island ancestry is to go straight to the source. The Statue of Liberty – Ellis Island Foundation runs a website which allows users to do free online searches of their records.  All you have to do is supply an ancestor’s name and it will find any matching records.

Keep in mind that even though your ancestor may have been processed at Ellis Island, you may not be able to find a physical record of the event.  A fire on Ellis Island on June 15, 1897 burned the immigration station completely to the ground and many years of immigration records dating back to 1855 were lost.

Although New York Harbor was by far the most popular port of entry, other major U.S. arrival ports for immigration in the 19th and 20th centuries included Boston, Baltimore, Philadelphia and New Orleans.  Numerous smaller ports were in operation at the time and also should not be overlooked.  Best of luck on your search for Ellis Island ancestry.